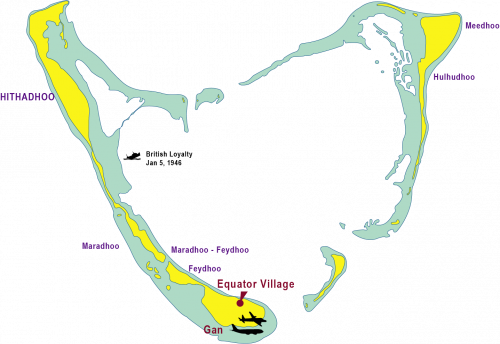 The southernmost part of the Maldivian archipelago, Addu Atoll has a unique and fascinating history.

Adduans are proudly independent, with their own dialect, cuisine and culture. The atoll was historically one of the most developed parts of the Maldives. According to sources, Meedhoo island of Addu has some of the earliest settlements in the Maldives.

The British Royal Air Force had a base in Gan island until the late 1970s (it’s now the international airport), and Adduans enjoyed free healthcare courtesy of the British, long before such services arrived in other parts of the Maldives.

Equator Village Maldives is built on what used to be the RAF’s Sergeant’s Mess. The old colonial buildings still stand, and have been tastefully converted and renovated with the modern traveller in mind. Set amidst a tropical garden where native species such as coconut, bilimbi, and frangipani thrive on manicured lawns, guests can choose to stay in ocean-view rooms or opt for the quieter rooms facing the gardens.

In recent years, Addu has made something of a revival. This relatively unexplored atoll is fast becoming a must-see place for Maldivians and foreigners alike. A new seaplane terminal, improved ferry services and a direct flight service from Colombo to Gan, is rejuvenating a sleepy backwater to an emerging tourist hotspot.

What sets Addu apart from almost any other atoll is land. You can drive (or cycle If you’re feeling fit) on the link road all the way from the airport island of Gan in the south to the northern tip of Hithadhoo – some 13km. And while tourism in and around Male’ can feel industrialised and mainstream, in Addu, every visitor is still an explorer.

For travellers keen to sample the undiscovered side of the Maldives, a tropical adventure awaits in Addu. Cycle along coral sand roads and experience Maldivian villages; seek out deserted beaches of soft white sand; or explore tropical jungles and mangroves – Addu offers a distinctive experience.

The ‘Line Crossing Ceremony’ as it was called in the earlier days was something of an initiation rite for travellers and sailors. In certain areas, these induction ceremonies would go on for days.

Shellbacks or the people who have already crossed the equator once before induct the Pollywogs (the newbies) in a two or more day ceremony full of entertainment out at sea.

Decades later, over in the Maldives, guests travelling to Addu, Gan are given a certificate on board the National Aircraft of Maldives, Maldivian. Announcements are made when the plan is about to cross the equator, which leads to lots of clapping and excited murmurs within the plane.